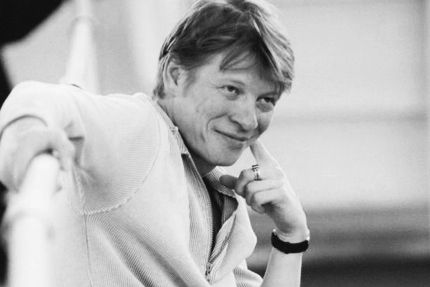 Sergei Vikharev in his own words

I come from a very simple family, it is a miracle that I ended up in a choreographic school.

Sergei Vikharev was born in Leningrad. At the age of ten, he entered the Leningrad Vaganova Choreographic School. Talking about his professional «genealogical tree», he liked to joke that he was in three handshakes from Petipa: «My first teacher, Anna Bazhayeva, was a daughter-in-law of Shiryaev, Petipa’s assistant. After her, there was Marina Vladimirovna, the mother of a choreographer Nikolai Boyarchikov. Finally, I graduated from the class of Vladlen Semenov, who was a pupil of [Alexander] Pushkin and [Vladimir] Ponomarev, principal dancer of the Kirov theater, a husband and a partner of Irina Kolpakova».

«He came to the Kirov Theater in a difficult time: by the beginning of the 1980s, its repertoire consisted mainly of sterile Soviet editions of classical ballets. However, the theater was gradually changing: a modern western choreography began to penetrate the Kirov stage, although in very small amounts. Vikharev, who had been working for the company since 1980, devoted himself to the classical repertoire: „a determined classic“, surrounded by the intricacies of the most sophisticated combinations, found his niche in the ballets of Bournonville and Balanchine, in the romantic Giselle and stylized Chopiniana, in still sterile at that time Sleeping Beauty and Fokine’s Carnival» (Tatyana Kuznetsova, «Kommersant»).

Those who watched Vikharev’s performance described it invariably using the word «style», and this was an exceptional thing in the era when the very notion of style was blurred and almost lost. Extremely clear articulation of steps, accuracy and restraint of movements, a choreographic text not as a mechanical set of steps, but as a coherent dance. Vikharev avoided the slightest negligence and vulgar demonstrations of «acting» and «soul», but somehow he was able to give the performance a great artistic sparkle.

Vikharev started his career as a choreographer in 1995 with a small ballet «Leda and the Swan» at the Hermitage Theater in St. Petersburg. A year later, the Novosibirsk Opera invited him to revive Mariinsky Theater production of the Sleeping Beauty. A year after that he was staging the ballet scenes of Ponchielli’s Gioconda at the Teatro Carlo Felice in Genoa.

Vikharev was not a choreographer in the true sense of the word, he did not create the original choreography, did not invent new combinations and duet lifts, he did not use the elements of other dance systems apart from the classical one. He was not a creator, but he was a keeper of the school’s traditions. In this sense, Vikharev belonged to the same profession as Petipa, and it would be more correct to call him a ballet master.

It is no coincidence that it was Vikharev, together with the ballet critic Pavel Gershenzon, who was sent to Harvard by the management of the Mariinsky Ballet in 1997. Vikharev was the first Russian choreographer to study the prerevolutionary records of Petipa’s ballets stored there. It was the beginning of a long-term project of Petipa’s ballets reconstruction — one of the greatest events in the modern history of Russian ballet.

The first production is the frame of this project and Viharev’s debut as a reenactor — was the Sleeping Beauty at the Mariinsky Theater. The premiere took place on April 30, 1999, and it would not be an exaggeration to say that this day the Soviet era of the national ballet theater really came to its end. There were various opinions about Vikharev’s method and the very idea of bringing Petipa’s ballets closer to the standards of the 19th century was not shared by everyone.

However, there were no doubts about Vikharev’s chorographical talent and the importance of the event: the return of the Sleeping Beauty in the old new interpretation was compared with the return to St. Petersburg its historical name in 1991.

Neither in Sleeping Beauty, nor in the subsequent works — Coppelia performed in Novosibirsk (2002), La Bayadère (2002) and The Awakening of Flora at Mariinsky Theater (2007), triumphal Raymonda at La Scala (2011) — Vikharev did not try to reproduce the exact plastic and manners of the 19th century dancers. It was not the poses copied from the old pictures that gave Viharev’s works their charm and nobleness. He despised such mannerism and was well aware that the psychophysics of the artists had changed dramatically over a hundred years. The rules of the school, on the other hand, remained unchanged, and Vikharev always strictly followed them.

In 2015, the reconstruction project reached a new stage: Petipa’s «La Fille Mal Gardée» was not completely recorded in the notations, which required from Vikharev a completely different approach and author’s inclusion, and this was exactly what he did in his work with the Ekaterinburg Ballet. Due to his highest skills as a choreographer, it is almost impossible to notice the difference between the old and new fragments. In addition, it is a ballet comedy of an exceptional grace and brilliance.

«Paquita» was the next work of Vikharev: again, Ekaterinburg, again the reconstruction of Petipa’s choreography, and again, the notes were partially lost, but directing tasks were even more challenging. Vikharev managed to choreograph the key ensembles, but his death interrupted the work. «The problem is not that our plans were cancelled: Vikharev’s professional culture, his taste and experience were unconditional even for those who did not accept his views. Petipa has lost his representative in the present» (Anna Galaida, «Vedomosti»). Now Vyacheslav Samodurov is in charge of the production: the premiere will take place on February 22, 2018.