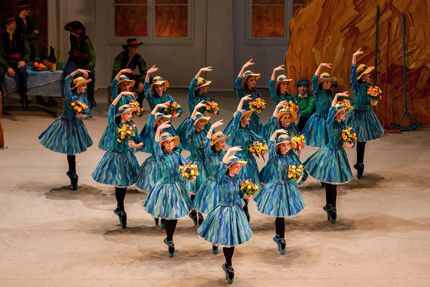 The Ekaterinburg opera and ballet theatre has become a headliner of the Russian theatre life.

Please note: somewhere in the Urals a new territorial ballet corporation is in the process of creation by the efforts of talented sharp-minded and persistent guys.

The level of the company is incredibly high and what it is showcasing at the moment, from its repertoire to performance, is everything but the provincial culture, for provinciality is not linked to geographical position. And Ekaterinburg has suddenly become one of the ballet capitals of the country.

The Ekaterinburg Opera and Ballet Theatre

Ballet admirers of St. Petersburg and Moscow have been lately looking at the Capital of the Urals where the local audience has the luxury to see there Russian and world premieres every year with envy. Here the summer and winter galas with world stars have already become a tradition. And, finally, here one can see the phrase “the winner of the Golden Mask National Theatre Award” on the billboards more and more often.

Ekaterinburg Ballet’s history started in 1912 and in 1931 the ballet company has become a separate creative body. The chronicles of the theatre bear the names of such famous choreographers as Leonid Yakobson, Igor Belsky, Nikolay Boyarchikov, Oleg Vinogradov, Natalia Kasatkina and Vladimir Vasiliev, and Yury Grigorovich.

And yet the “Urals ballet abnormality” phenomenon has appeared right before our eyes. The newest history of the Ekaterinburg Ballet started in 2011, when Viacheslav Samodurov, then the principal dancer with the Royal Ballet Covent Garden, was appointed an artistic director of the ballet company by Andrey Shishkin, the director of the theatre. Samodurov is familiar both with the structure of Russian opera houses and lifestyle of Western ballet companies. His aim is to create a universal company with its own style and repertoire that is not copied from the theatres-giants of the capitals.

Today on the list of the Ekaterinburg ballet there are several evenings in the traditional for the Western theatres triple-bill format where the classics of the 19th and 20th centuries enter the dialogue with the freshly created choreography pieces. Ekaterinburg has picked up the project on the reconstruction of Petipa ballets, started by the Mariinsky Theatre, with La Fille Mal Gardée that according to the critics “demonstrated such a potential (of the reconstruction of old ballets) that we have never thought of”. It was here that the ballet by Lightfoot-León was staged in Russia for the first time.

On Samodurov’s initiative the yearly workshops Dance Platform were launched 5 years ago, the best graduates of this programme gained an opportunity to stage their own production in July 2017.

The Ekaterinburg Ballet today is flying high and there is every reason to expect new breakthroughs from them.