Ballet-feerie in 2 acts with epilogue
Premiere in St.Petersburg

This fairytale is out of season. The story of Nutcracker became a cosmic one as soon as it was born. The magic snowflakes will whirl following the Tchaikovsky’s music for so long as the children will grow up and the adults will believe in miracle.

The version by Miroshnichenko is not a fantasy after the famous storyline, but a veritable classic ballet, yet absolutely new, and, in the same time, magnificent, dramatic and kind.

The events of the show take place in St. Petersburg in 1892 (that’s when the Nutcracker was premiered on the Mariinsky stage). Delicate, impressive and detailed scenography by Alyona Pikalova will bring you into a happy St. Petersburg's house where at the place of one of the kids you may even imagine your own great grandmother. Interiors, furniture, dishes, and toys – all here is so living, warm and authentic that it’s moving you to tears.

The history of Mary, it’s not just a dream and fairytale; it’s a touching history about how we let go of our childhood illusions. Of course, Mary is the main character here, but all the other figures are also very colorful and remarkable: each of them possess his own recognizable personality and his own fascinating dance.

Irrespective of your age, you will believe in this Nutcracker. This fairytale, like a favorite toy, raises the most important feelings and sentiments that keep us warm all our life long.

This spectacle is worth visiting with family. The children will especially enjoy it. And maybe some adult will remember and realize that growing up is not so easy as it seems.

«Nutcracker»: flowers instead of sweets
Tchaikovsky: involuntary assumption of power
Interview with choreographer:
«Nutcracker has followed me all my life»

This fairytale shows us that love can animate everything in the world, even a doll. And also — that absence of love can turn a human into a doll.

In musical world of Tchaikovsky the choreographer successfully feels the rhythm of modern life which sometimes looks like phantasmagoria.

ACT II
first scene
Marie and the Prince continue on their wanderings. The angels fly on ahead to protect them from any hurdles along the way. In Blumenburg, lovers from all over the world are on hand to welcome the guests. The royal page boys show the new arrivals the way.
second scene
The King and Queen of Blumenburg are preparing to receive their guests. Fairies gather flowers of every kind in the garden. From the crowd of gathered townsfolk, Marie and the Prince emerge.The Prince talks of his ordeal in the guise of the Nutcracker and lets it be known to all that it was Marie who saved him. The party begins. Spanish, Arabian, Chinese, Russian, French and Italian dancers parade before the guests. The Prince and Marie are enthralled by their dancing. The King and Queen present the protagonists with a fragrant bouquet of lotus flower, peonies, roses and lilies which are also surrounding them in a wonderous dance. Marie and the Prince are happy beyond measure; they experience feelings of extreme warmth and tenderness. The Prince asks Marie if she will remain in this land of love with him forever. Marie hesitates for a second to grant him his wish — and the spell is broken: the magical town fades away and the lovers turn back into a pair of puppets. “Wait!” exclaims Marie; she’s ready, she agrees. She asks the Prince to forgive her fleeting reservations — but he’s already turned back into the Nutcracker. “Oh, what have I done!” Marie cries. Everything has disappeared. She runs forward, trying in vain to glimpse a hint of anything in the distance. Out of nowhere Drosselmeyer appears. Marie tries to run towards him, but she is overcome with weakness and stripped of all feeling.
third and fourth scenes
An alarming noise wakes Marie. She opens her eyes and realises that she is at home, in her bed. Fritz with his brand-new trumpet, given to him yesterday, has come crashing in, in order to wake his sister. Mrs Stahlbaum enters behind him along with the nanny. They are relieved to find Marie still in her bed. Yet Marie doesn’t feel herself. She searches high and low for the Nutcracker, and unable to find him anywhere, goes rushing out onto the street. She must find Drosselmeyer.Only he will believe her secret about the Nutcracker — he is the only one she can talk to about her dream.
fifth scene
Christmas night has passed, the festive mood continues to prevail on the streets of St. Petersburg. Marie runs to the square in which the city carnival is taking place. Strangely, everything seems to resemble her dream! The merry street entertainers looked like the lovers from around the world. “And the King and the Queen from Blumenburg looked very familiar… Ah, of, course — they looked like my parents!” realises Marie.And there’s Drosselmeyer, except he’s not alone, but with a young boy. Marie joyfully runs toward her godfather and begins to recount her amazing dream. “Allow me if you will, the councilman says with a smile, to introduce my nephew.” The young boy greets Marie and upon seeing him, she notices he bears an uncanny resemblance to the Nutcracker Prince. The young boy also senses he’s seen Marie somewhere before. Their recognizing one another turns from amazement into joy. “Something tells me,” councilman Drosselmeyer mutters under his breath as he looks at them both, “is that Marie will almost certainly never repeat the mistake made by Princess Pirlipat. 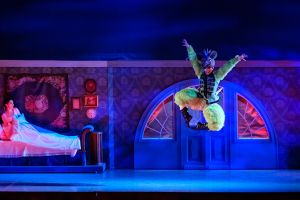 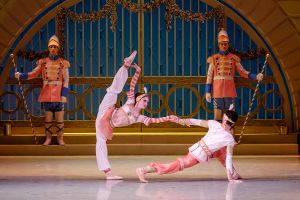 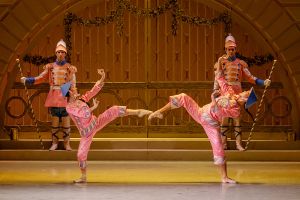 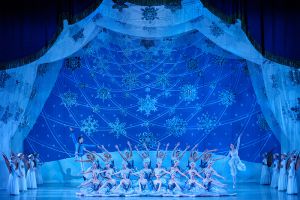