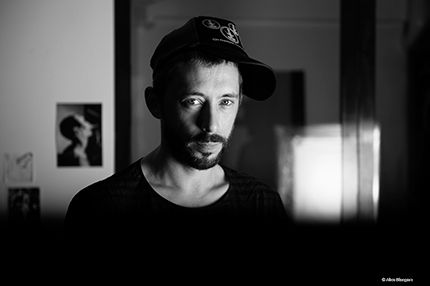 Jeroen Verbruggen creates his own codes. They are encrusted in his production which makes clear that in the closest future this choreographer should be seriously regarded to.

His popularity is increasing every day.

A choreographer with a magical, festive and limitless imagination, the foundations of an enchanting moment appear due to his exuberant, joyful, lyrical and tender dance.

A very important man with a very idiosyncratic, modern view of the old story.

Jeroen Verbruggen in his own words

...It's directly from the music that I get my ideas and images.

...I enter the class prepared perfectly, scene by scene, even though some movements come to me just at the place. Nevertheless, I always have very clear images in my mind, and know precisely where I have my dancers to lead.

...I was always pushed to the classic. But I have never been absorbed by it. I was gifted for this art but I felt like a rebel because I never did things the right way.

His star rose fast, though he started to dance pretty late at the age of 13. Royal Ballet School in Antwerp, silver medal of Prix de Lausanne which brought him scholarship in Canada and, then, the second place at young dancers’ contest Eurovision, London, where he danced his self-made solo Hyperballad. In 2001 Verbruggen became a choreographer of Belgian national TV channel Vervolgen. The same period is marked by performing with the Royal Ballet of Flanders, where he met Jan Fabre.

In 2004 the lucky destiny brought him to Monaco: he worked for the Ballet de Monte Carlo for next 10 years, and this company gave him both strong professional growth and recongnition. He was brilliant in leading roles of Jean-Christophe Maillot’s main productions, and the same success accompanied his participation in works of guest balletmasters, such as Sidi Larbi Cherkaoui, William Forsythe, Emio Greco and Marco Goecke. This huge and diversified experience inspired Verbruggen to try choreography himself.

His full-scale ballet-master’s debut took place in 2012 when Maillot entrusted him Kill Bamby production for Monte Carlo company. The show was broadcasted on Arte live. This fancy ballet was based on a comlicated philosophical paradigm and dealt with the basic questions of life or death which were expressed by a very personal dance language. Kill Bamby made critics and experts speak about Verbruggen as of a rising star. His next show Arithmophobia staged in 2013 for the same company proved again the Jeroen Verbruggen’s status as an accomplished choreographer with a strong personified style and an almost boundless imagination.

In July 2014 he decided to finish his dancing career and to focus on choreography. In November 2014 the premier of The Nutcracker with the Ballet of Grand Théâtre de Genève received enthusiastic reviews from critics who gave the show a delightful title of a «feery which the world has been expecting for years». The triumphant participation in XVII Dance Open season persuaded St.Petersburg that the Nutcracker may be very unexpected yet charming.

Verbruggen is versatile in his work: he choreographs for both classical and contemporary companies. Just to mention: A Mighty Wind for National dance company Wales (2015), Pointless for Ballet National de Marseille (2016), Ma mère L’Oye for Ballet Flanders (2016) broadcasted worldwide. And Where have all the Flowers gone for Ballet Nuremberg (2016),Orphic Hymn (Triptych Ballet) for the National Slovenian Ballet (2017), The Great Trust for the Hessisches staats ballett, premiered in Darmstadt (2018) and experimental full-length ballet performance Open (S)pace for Ballet im Revier, Gelsenkrichen (2018), Dancehall for Ballet Moscow (2019) and Schiamachy for National Finnish Ballet (2019), as well as Aimai je un rêve? (After the afternoon of a Faun) for Les Ballets de Monte Carlo (2019).