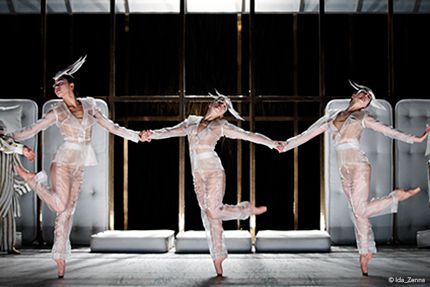 One of the most exciting international dance companies in Germany. 40 creative and expressive dancers from more than 20 nations know how to thrill with their virtuosity in choreographic works ranging from neoclassical ballet to contemporary dance. Between tradition and progress, ballet director and chief choreographer Mario Schröder, together with his company, is a bridge-builder between art and society, thus developing a charisma that radiates well beyond the borders of Leipzig.

Important names of 20th century dance history, like Mary Wigman or Uwe Scholz, are linked to this long- established ensemble. From 1991, the latter left his mark on the company like no one else before him and created his key works in Leipzig. Until the present day the legacy of Uwe Scholz is alive in the Leipziger Ballett’s repertoire.

Mario Schröder, ballet director and chief choreographer since the 2010/11 season, has taken the company to the 21st century. In his language of dance, the excellence and precision of Neoclassicism is united with the individuality and expressive power of contemporary dance. With immense creative power he has created countless new choreographies that could not be more different: Time and again Schröder has investigated icons of film, music and pop culture, thus producing full-evening dance events like Chaplin, Morrison or Murder Ballads. Over the last years, the Leipzig head choreographer has turned to the musical grandmasters from Classicism to Modernity. He is particularly fascinated by the power of the collective, the choir. His Mozart Requiem or Mendelssohn’s Hymn of Praise, which Schröder combined with Poulenc’s Figure humaine, released torrents of enthusiasm with both critics and the audience. Schröder’s choreographic dialogue with his late mentor Uwe Scholz, who passed away in 2004, has never ceased. Not only do his works remain on the programme, but they are also questioned, commented and complemented with Schröder’s own choreographies (Pax 2013, Rachmaninov).

One of the biggest assets of the Leipzig Company lies in its stylistic diversity. The dancers perfectly know how to switch between different styles. This is not least owing to the fact that right from the beginning of the Schröder era, numerous choreographers of international renown have constantly extended the dancers’ language of movement, e. g. Meryl Tankard (Cinderella), Ohad Naharin (Decadance), Ivan Perez (Flesh) or Thierry Malandain (Mozart à Deux / Don Juan).

With their exceptionally diverse repertoire, the Leipziger Ballett is one of the most sought-after tour companies. Guest performances have sold out theatres and rapt audiences in Columbia, Brazil, Taiwan, the Czech Republic and Spain.