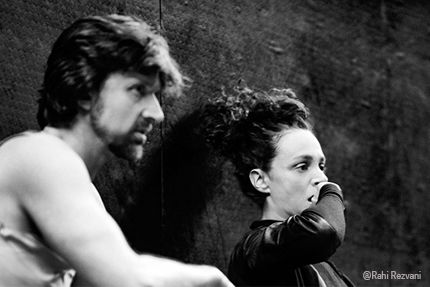 Their dances vary widely in mood, from playful to darkly dramatic, but they are often highlighted — perhaps not accidentally — by an intricate onstage partnership.

...[They] know how, through the mastery of light and perspectives, to sculpt impressive images.

Their contrasting styles complement each other — his classicism tweaked by her quirky individuality.

Leon-Lightfoot, which is how they sign their productions, is a true representation of the present day choreography. Having been working in NDT from a young age, they inherited the productivity of their teacher, Jiří Kylián: they continuously launch new productions with the regularity of a well-functioning assembly line, at the same time, they do not go down to mass market production.

Paul is not only gifted, but also charismatic, working with him is an absolute pleasure and unique experience. His works are incredibly up-to-date; they are witty and dramatic, filled with passion and energy.

Paul Lightfoot in his own words

...My main inspiration is nature.

...I enjoy working with cultural layers that differ significantly from the conventional tradition that I belong to — I like constructing dialogues.

...In modern art I prefer sincerity, which is the most important thing out of all, I guess.

...Esthetics is a good thing and the beautiful lines of ballerinas are always an inspiration, but if there is no soul, no inner sense, then I don’t enjoy working with it.

...As in case with all types of relations, artistic duet of course is not easy. Our union, both artistic and professional, went through different stages of development, at the very beginning we seemed to constantly hold each other’s hands, later it became more important to be more separated from each other: me is me and you is you. We got more mature and our relations have become really well-balanced.

...Imperfections can be very beautiful, and what make things or people special, so I don’t look to make the perfect piece, and I think that’s part of what makes it magical sometimes.

...Together we have the most potent tools for expression and are able to project what people are feeling.

...I would give them a warning, with all the kindness in my heart — make sure you’ve got something to say. It’s not good to do anything in life if you don’t believe it.

...It’s very important to have your own language. Work a lot with your own body, don’t just wait for others to do all the hard work for you, because it is hard work.

Sol León in her own words

...What matters is the openness and humanity.

...We prefer adding up our philosophy and explaining why one needs to do it this way and not the other, as well as helping the artists to find the meaning and deliver this meaning to the audience.

...When you have certain skills and you are coming beyond the habitual, your talent will only strengthen and get immune.

Paul Lightfoot was born in Kingsley, the UK, in 1966. He graduated from the Royal Ballet School in London. In 1985 he joined the Nederlands Dans Theater (NDT) under the direction of Jiří Kylián and quickly became a beloved member of the company. He performed in the works of Jiří Kylián, Hans van Manen, Mats Ek, Ohad Naharin, Nacho Duato and many others and debuted as a choreographer in 1989 with The Bard of Avon. In 2002 he was appointed NDT’s house choreographer, together with his creative partner Sol León. In 2011 Lightfoot became the Artistic Director of NDT and this was his last season at this position.