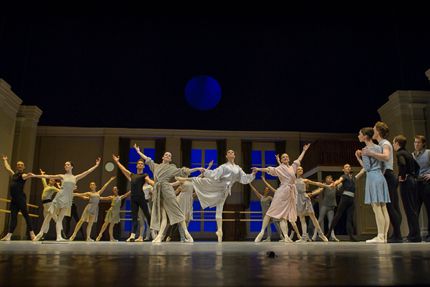 This company has a good reputation and great working capacity. I can see that they are working with pleasure. And furthermore — they understand why they are on the stage and what are they doing it for.

The Perm ballet is justly considered as one of the best ballet companies in Russia. And the unattainable level of Russian ballet makes it even one of best companies in the world.

The artistic style of the chief choreographer Alexey Miroshnichenko is especially notable by a comprehensive and intelligent approach to selecting ballet repertoire.

Tchaikovsky was born in a neighbouring town; Diaghilev, the innovator and founder of the Ballets Russes, had his roots in Perm; and Miroshnichenko is an embodiment of this interconnected tradition.

A visit to Tchaikovsky Perm Company night is enough to remind you about passion for ballet.

The history of the Perm Theatre is rich for iconic figures and miracle coincidences that largely define an honourable place that it has today in the ballet world.

It might be curios that at the origins of the theatre was…. Diaghilev. Not the famous ballet impresario, but his grandfather, Pavel Diaghilev, contributed to the construction of the stone theatre in Perm. And his grandson one day would draw a famous ballet parallel on the globe — Perm — St. Petersburg — Paris. In 19th century Petr Tchaikovsky became the spiritual patron of the theatre. Its stage witnessed the productions of all Tchaikovsky’s operas and ballet that was one of the reasons why the theatre was given the name of the famous composer in 1965.

In the middle of the 20th century tragic events of the Second World War strangely contributed to the development of Perm Ballet School. The legendary Mariinsky (then Kirov) Theatre and Vaganova Academy were evacuated to this hospitable Ural city. Thousands of professional and friendly connections were established between Perm and Leningrad, thanks to them the Perm Theatre learnt the famous Vaganova system and St. Petersburg style in ballet and enriched its choreography language with new concepts. And now, in 70 years, these links explain the fact why the ballet stars from St. Petersburg and Moscow are eager to work with the Perm Company. Since that time Perm has its own choreography school, its graduates are well-received at the most prominent ballet companies of the world.

The Perm Theatre has gained the reputation of a creative lab where new ideas are born and its very own particular style is getting developed. Perm ballet was the first Russian company perfoming the ballets of George Balanchine, a famous choreographer of the 20th century, and then — the ballets of Jerome Robbins. The stage of Perm theater is the only stage in Russia where Jiří Kylián’s Wedding and William Forsythe’s Second Detail, as well as the legendary Romeo and Juliet of Kenneth MacMillan, are performed.

The new page in the history of the Perm Ballet began in 2009, when Alexey Miroshnichenko, a prominent choreographer, became its artistic director. Although the Golden Fund of the Perm Ballet constitutes of such masterpieces of world classics as Swan Lake, Sleeping Beauty, Don Quixote, La Sylphide, Spectre de la Rose, Chopiniana, key to its success lies in the adaptation of the works of the greatest choreographers of the twentieth century, not known to the Russian audience. One more particular feature of the Perm Ballet is its willingness to work hard with the rare ballet material. Thus, in 2011, in 90 years after its first premiere, Jester by Segey Prokofiev was revived on the Perm ballet stage.

The Perm Ballet was awarded with many international and Russian prizes, amongst them numerous Golden Masks, the most prominent Russian theatre awards. The company has been actively touring the world since 1973, it performed in such countries as Australian and New Zealand, Japan and Sothern Korea, China, the USA, Thailand, India, Nicaragua, Bahrain, Oman and Cuba.