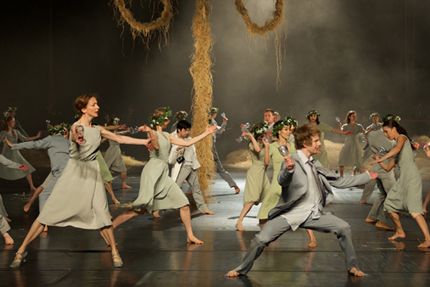 The unique mixture of classics and modernism, acrobatic technique and virtuoso dances breaking the laws of physics and gravitation… In the recent decades a small modest company without extreme funding or legendary chronicles is developing so quickly that it’s used to be called a «Dortmund miracle».

This miracle is an unquestionable merit of the Chinese choreographer Xin Peng Wang, Dortmund’s ballet director since 2003. He studied choreography at the Beijing Dance Academy and modern dance at Folkwang University of the Arts in Essen (a cradle of contemporary German choreography). The huge and varied experience was acquired by him during his projects as a freelance choreographer worldwide: at the Hong Kong Ballet, National Ballet of China, Contemporary Dance Festival in New York, Dutch National Ballet, Royal Flanders Ballet, Ballett Dortmund as well as at many others.

Xin Peng Wang may be considered a genuine wizard. Otherwise, many of surprising miracles would never have happen with his company. In example, Mauro Bigonzetti’s Alice which obtained a remarkable success both in Dortmund and in St. Petersburg in frames of the XVIII season of Dance Open festival. The extraordinary Italian choreographer preaches that the human body is a source of infinite opportunities, expecting the same from the dancers he works with. One should be a bit crazy and very passionate in order to perform his choreographies insightfully and brilliantly as the Dortmund Ballet does.

Walking down the line of exploration of the other sides of mentality and the principles of irrational worlds, the company ventured an outstanding collaboration with Alexander Ekman. He, who is used to break new ground in each of his pieces, as alternative and offbeat as almost no one else, requires the dancers to respond him totally. The result of this cooperation — The Midsummer Night's Dream — it to be judged at the XIX Dance Open in Petersburg and to prove once again that Dortmund Ballet copes with any task with both virtuosity and charm.

Over the past few years, Dortmund Ballet has also worked with such choreographers as William Forsythe, Hans van Manen, Douglas Lee, Christian Spuck, Edwaard Liang, Benjamin Millepied, Demis Volpi, Jiří Bubeníček. Even the short list of such names demonstrates the range of audacity and talent of the company.