Ballet in 2 acts after William Shakespeare
Premiere in Russia

The house bill of this production looks as if a magician aimed to gather a dream team. The play which is considered the Shakespeare’s poetical bequeathal and his reflection about the world order.

The choreography by Krzysztof Pastor, arguably the most outstanding of Polish ballet masters ever. Video by a poignant lyrical Iranian artist Shirin Neshat, who got the Artist of the Decade title in 2010, and her partner Shoja Azari. Costumes by an “exquisitely intelligent”, “highly theatrical” Tatyana van Walsum. The music, not only threading the time, but forming a mental equlibrium of European culture from Shakespeare’s coeval Tallis to young and revolting Michael van der Aa, covered by a blanket of Iranian folk melodies.

All is a harmony here. All is a universum. And all is a struggle for the equilibrium.

“It has no unequivocal ending, or conclusion”, Pastor says. “Perhaps Shakespeare deliberately left a lot for us to interpret for ourselves. In this sense the play is very contemporary, it does not limit the audience to passive participation — it requires involvement, it is an intellectual challenge”.

Krzysztof Pastor has extracted elements from Shakespeare’s complex last play and woven them into a heady mix of sounds and visuals to create a piece of dance theatre that glows with originality.

Shirin Neshat and Krzysztof Pastor’s work is a collection of emotions and meanings difficult to sum up in one article. A whirlwind bringing in a new force of spiritual change and renewal, bringing us to a future in which key words just have to be respect, lenity and inclusion.

One of Shakespeare’s most unpredictable works is The Tempest — it has numerous layers and also supports a wide range of interpretations. In this manner, it is an unlimited wellspring of motivation, as well as a major test for choreographers.

Duration: 2 hours 10 minutes with one intermission

Old Prospero sits on his island, reflecting on the things that happened in the past. He once was the Duke of Milan, but he was expelled by his brutal rivals, together with his daughter Miranda. The island was not uninhabited when he arrived. Sycorax, her son Caliban and their people already lived there for a long time. Although Sycorax died some time ago, the indigenous Caliban and his people still consider the island theirs.

By conjuring up a storm with the help of the magical air spirit Ariel, old Prospero’s memories are awakened. He remembers he arrived in a similar storm on the island after a shipwreck. Carried by the waves the young Prospero was thrown on the shore with Miranda and they were saved by Ariel and Caliban. After his arrival on the island, the young Prospero immediately takes possession of it, with the aid of Ariel. Caliban and Miranda get to know each other, but Prospero takes care of his daughter and protects her vehemently. Nevertheless, Caliban and Miranda seem to be attracted to each other, which angers Prospero even more. Miranda is torn between the two men. Caliban feels rejected and upset about losing not only the power over the island.

With the help of Ariel old Prospero conjures up a storm to revive his memories again. After some years another shipwreck brought his two rivals to the island, Stephano and Trinculo, together with Ferdinand, a young prince from Naples. Ferdinand is rescued from the waves by Ariel. Ferdinand is sad that he lost everything in the storm, but Ariel tries to console him. When young Prospero and Miranda find Ferdinand on the shore, Miranda is touched by the tragic fate of the prince. Unknowingly she is now entangled between her father, who is indecisive to let her go or not, and Ferdinand, who would anyhow be a more suitable partner for her, as far as Prospero is concerned. The closer Ferdinand and Miranda get together, the more upset Prospero becomes, and even Ariel cannot calm him down. For old Prospero the memories become very lively now.

With the help of Ariel old Prospero conjures up a storm to revive his memories again. He remembers that the same shipwreck that brought Ferdinand to the island, also brought his brutal rivals Stephano and Trinculo. Caliban discovers them on the shore. In the beginning the two men are afraid of Caliban, which they consider as primitive, but gradually they overcome their fear and they even try to beat him up. The people of Caliban arrive to set him free. After a failed attempt to civilize Caliban and his followers, Caliban suddenly realizes that he could use these men for his plot against Prospero. Directed by Caliban, Stephano and Trinculo attack their old enemy Prospero with the help of Caliban’s men. But with his magic Ariel freezes everyone on the spot in order to save Prospero and then he sends dangerous dogs in to chase the attackers. Prospero wants to punish and even kill Caliban now.

In a final attempt to revive his memory old Prospero conjures up another storm. He envisages Miranda and Ferdinand in their attempt to lift a big tree, an obstacle he has once put there to keep them apart. But in their act of love they manage to lift the tree and to push aside Prospero’s power over them.

Now old Prospero can fully confront his past and meet his young counterpart. In a final reconciliation they all come together: Prospero, Stephano, Trinculo, Miranda and Ferdinand. But by fully realizing what has happened during his lifetime, Prospero now understands that he lost his most precious possessions: daughter, youth, faith in humanity. And he realizes how unfair Caliban was treated by him. 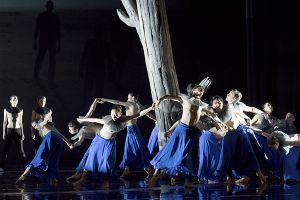 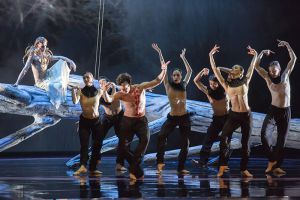 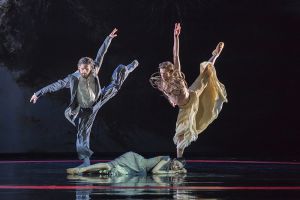 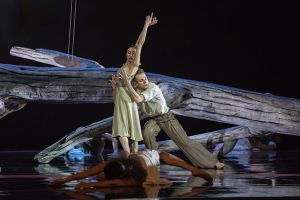 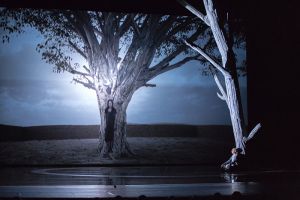 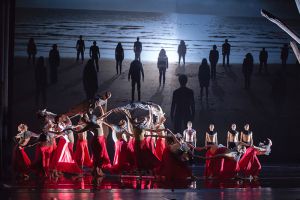