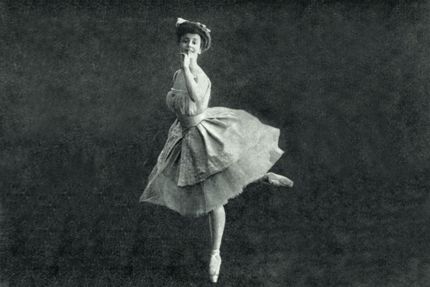 Mysterious girl
with a book

Coppélia is the first world’s ballet telling how an intellectual aspirations of a lady may impress a man. Well, once upon a time, there was a nice couple, Franz and Swanhilda; everything went as was supposed to, they got almost ready for a wedding — but one day, all of a sudden, Franz met a lovely girl sitting, a book in her hands, totally absorbed in her reading. Caught and mystified, Franz got affected especially of the fact that she paid no attention to his attempts to approach. What an affront. The guy got almost maddened, the marriage turned threatened, and all the things fall apart. The ballet was inspired by Hoffmann’s story where characters had another names and everything ended tragically with madness and suicide of the principal character. But a genius French choreographer Arthur Saint-Léon transformed this tragedy into a comic ballet to the music of Léo Delibes. Unlike the novel, here nobody dies, and everything ends happily with wedding and dancing.

A century later, Saint-Léon’s production (the first, but not the last one: Coppélia had many productions worldwide, including Russia) was restaged in the Paris Opera by Pierre Lacotte. By that time, he had already gained glory for his reconstruction of La Sylphide on Fillipo Taglioni’s original version. And he had his whole career ahead of him, full of excellent works — Natalie for Ekaterina Maximova in Moscow and Marco Spada at the Opera of Rome with Nureyev, La Fille du Pharon for Bolshoi, Ondine for Mariinsky theatre and Paquita in Paris. Pierre Lacotte is a sophisticated connoisseur of ancient times, but not a copyist: his ballets masterfully convey the atmosphere and charm of the époque, but they never cite choreographic texts exactly. Sometimes Lacotte affords himself to ignore historical accuracies when it seems him important to show changes that have appeared in classical dance, even if they happened after a ballet premiere (for example, it is known that only Maria Taglioni danced on pointe in Sylphide, while corps de ballet danced in shoes ; but in Lacotte’s production all ballerinas dance on pointe). In Coppélia Lacotte followed the same rules: he restored the ancient pantomime, lost with the passage of time, reconstructed national dances (almost forgotten in Europe), but he refused to simplify the text. Also he refused to give the leading male role to a woman. His Franz is as manlike as expected with a full assortment of manlike tricks. As the result, the ballet became a technically complicated one, and now it is regarded as a manual and dictionary of the «École Française» classical style.

Perhaps, that was the reason for the artistic director of the Vienna State Ballet Manuel Legris, fascinated with this ballet, to decide to invite such a maître and his production (the premiere is awaited in January 2019). Legris, having been Danseur Étoile of the Paris Opera for many years, now requires his dancers to demonstrate the same level of virtuosity and fineness as it is demanded in Paris. And all these tiny steps, polished manners and smiles — the distinguished French style, taught from the first days at school — today increase the fame of Vienna ballet as well.