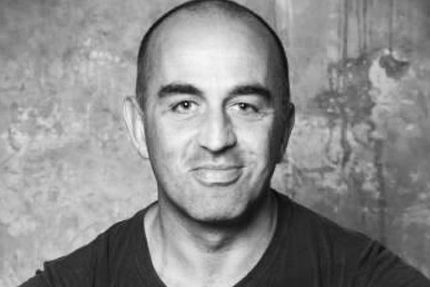 Godani's style is marked with powerful images and bodies as light as feather.

He tunes the music up for himself and as a result makes a striking performance, sharpened in each and every part with a violent rotation of light spots and human bodies' combination. This looks like a train at full speed, going to nowhere and not letting anybody jump off it. This is superb in its perfection and exhaustive in its heartlessness.

Italian-born, dancer-choreographer Jacopo Godani began studying classical ballet and modern dance techniques in 1984 at the Centro studi Danza of La Spezia under the direction of Loredana Rovagna. He also pursued studies in the visual arts for three years at the Fine Arts School of Carrara. In 1986, Godani was accepted to further his studies at Maurice Bejart's international dance centre, Mudra in Bruxelles, Belgium.

Godani made his professional debut in 1988 performing in Le Marietta Secret in Paris. He also performed with Archipel Sud in Namur, Belgium and in the Paris-based company of Jean Francois Duroure. In 1990, Godani formed his own Bruxelles-based company and began his choreographic career. His work in Bruxelles was produced by the theatre Atelier Saint' Anne and was supported by the arts festival Bruxelles Central and the Plateau theatre.