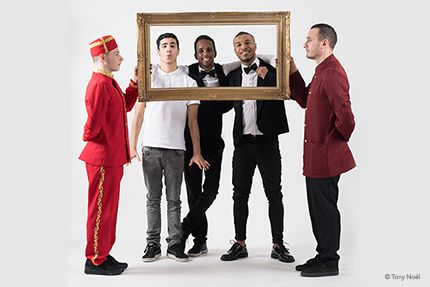 Humor, jazz and incredible virtuosic technique somewhere between a hip hop and breakdance make them stars of new generation

They are called world champion of their discipline!

Creativity and virtuosity, energy and scenic expression, these young dancers are breathtaking!

Founded as recently as 2016, Tie Break has been received rapturously from its very first steps. The company’s secret is simple and straightforward at the concept level, but almost impossible to implement practically.

First, you choose a style of choreography that is entirely inappropriate for the classical stage — let’s say alternative street dance. Next, you need to select a crew of performers who are all absolute masters of their art, but also absolutely different in their personal style — dancers from entirely different ethnic backgrounds, for example. Finally, you’ll want to carefully shred all the standard stage genres — whether that be comedic mime, jazz musicals, or circus shows — and mix them all together to produce an entirely new and original form. That’s all it takes to find your niche, and success is guaranteed.

And guaranteed it is for Tie Break, who continue to wow critics and audiences throughout the world. Even the most inveterate ballet snobs tap their feet and thrill to somersault after dizzying somersault, each one not simply a trick but a separate phrase in a coherent and highly entertaining choreographic text.

All eight of Tie Break’s members are veterans of their complex art, with fifteen years of experience in the legendary hip hop company Pockemon Crew, the first to take breakdance from the streets of Lyon to the stage of Opéra National de Lyon and other major concert halls. Their experience with the company not only molded them as dancers, but also inured them to all the vicissitudes of life as performers — the endless tours, the international competitions, the victories and the recognition. But then it became apparent that they needed to develop further. Four of the talented members — Moncef Zebiri, Patrick M’bala (Bboy Wazz), Nagueye Mahmoud (Bboy Niggaz) and Farès Baliouz — decided not just to form a separate company, but to build their own entirely unique street dance theatre. That was what lead to Tie Break and to a new avenue of hip hop performance.

One of their most amazing features is their constant improvisation on stage, which aligns them both with breakdance and with jazz. Their irrepressible energy, artistic freedom, and urge to astonish attract the most varied audiences, from teenagers to academics. However, they see the purpose of their work not as entertainment but as a demonstration that any genuinely skilled artistic performance has the right to its own page in world history, even if it has its roots in the working-class districts of major cities. And they really are changing people’s attitudes to hip hop, performing on the stages of leading theatres and collaborating with pillars of the cultural community in France and elsewhere. Tie Break compel us to look afresh not just at their genre of dance, but at a whole layer of alternative culture that has long gone unacknowledged by official institutions.

Furthermore, as well as selling out venues all over the world, they also actively collaborate with schools and festivals, using their spectacular stunts to engage young people with dance and the theatre. These young people then copy them, practicing incredible combinations of moves and tricks. And that’s surely better than spending endless hours slumped over a gadget, trying to shoot a virtual tank, isn’t it?