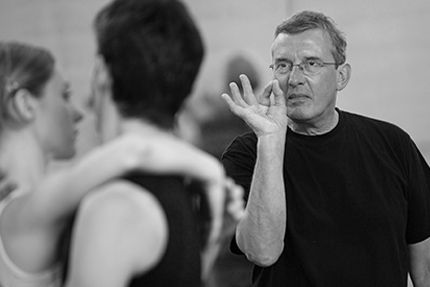 Nils Christe in his own words

I find that working with dancers is really the same wherever it is in the world — all dancers are hungry to learn new material, they are like sponges.

I do my best to be receptive to what the energy is like in the studio. It would be a waste of time to just bark my own ideas at the dancers all the time. It’s much more fun when it’s a collaboration.

There is the difference between trying to show myself in the choreography, or using the dancer’s quailities. The movement always looks a million times better when the dancer identifies with it in some way.

He was born in Rotterdam (the Netherlands) in 1949. He received his dance education at the Rotterdam Dance Academy and for fifteen years was one of the leading dancers of the Nederlands Dans Theater. It was here that he made his first choreography in 1974. This was quickly followed by other works, including Quartet 1, with which he won the first prize at the famous Choreography Competition in Cologne in 1979. From 1986 to 1992 Christe was the artistic director of the Scapino Ballet.

Over the last twenty years Christe worked in the Netherlands making choreographies for companies such as Dutch National Ballet and Introdans. He also worked with international companies, in total, Nils Christe has worked with 68 companies in 25 countries all over the world and thus achieved major international fame. Since 1981 Christe has had a close bond with Introdans company and by now their repertoire contains a total of over 20 works by him.

The choreographer admits that the music is his creative catalyst. International critics unite in calling him a true «music choreographer». Traditionally, Christe scrupulously analyses each chosen music fragment before the first meeting with the artists. He has notebooks filled with analyses, down to the last note, of the compositions he uses for his ballets.

The result of this labour is there for all to see, because in his work you feel that every step, jump or arm movement is there for a purpose. His choreographies seem to be natural extensions of the sound world created by the composer.