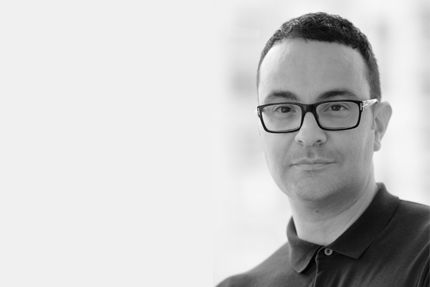 At the start of any creation, Soto has many parts of the piece already mapped out in his mind, including the structure, specific moments and images, costumes and lighting design, all with the music in place. He works very photographically in this way. But once he’s inside the studio, Soto choreographs from a place of “raw instinct".

Soto (1975) began his formal dance education at the Institut del Teatre in his hometown of Barcelona, and went on to study at the Royal Conservatoire of The Hague in the Netherlands. He danced for one season at IT Dansa in Barcelona and then joined Bavarian State Ballet.

It was here that Soto created his first ballet, Plenilunio, as a part of a workshop performance that showcased pieces created by company dancers. Philip Taylor, who was the artistic director at the time, added Plenilunio to the company’s repertoire, and each year until Soto left, he commissioned a new ballet from him.

In 2005 Soto ended his dance career and became a freelance choreographer, and since then he has had no shortage of work. Soto has created pieces for many companies in Europe and North and South America, including Stuttgart Ballet, Ballett Dortmund (Germany), Gauthier Dance Company (Germany), Royal Ballet Flanders (Belgium), Perm Theatre (Russia), Aspen Santa Fe Ballet (USA), Les Ballets Jazz de Montréal (Canada), Balé da Cidade (São Paulo), Nederlands Dans Theater (the Netherlands). Since 2009 Soto has been a guest choreographer for Introdans.

When sourcing inspiration for a new work, Soto doesn’t have to look far. “I don’t get inspired anymore by a painting or a piece of music,” he asserts. “It comes from some internal point of doubt. Some people go to the psychologist. I go to the studio. It’s where I psychoanalyze myself.” While his work draws from his private thoughts and “internal life”, he believes they address universal issues that are relatable to everyone on one level or another.

Always existing in some creative environment, sort of choreographic continuum, Soto uses a lot of lexical, physical and conceptual elements that make his works particularly relevant. Only when artists start to absorb choreographic material, liberate themselves and dive into creative process, Soto begins to trust the Company, experiment and set new objectives. At night he reflects on the day’s work with a critical lens, trying to uncover the hidden moments or missing pieces within the ballet.

Undoubtedly, through his future projects, we will continue to see Soto’s inner dialogue transform onstage in artistic extremes. To the same degree, Soto hopes his works will elicit extreme emotional responses from his audiences. “I want people to love it or hate it — to have a reaction. I want them to feel moved.”