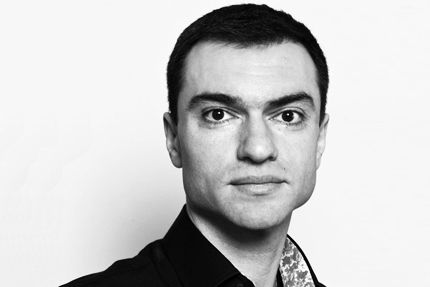 My main interest is in real human beings.

Ballet can express what cannot be said by words. Ballet let us find the line between visible and invisible.

You need to get up early and work hard every day. That's all the magic there is to it.

It is necessary to keep the balance between the conservatism and innovations. A dancer must have a classical academic background in order to be able to dance everything. Just like an artist should be able to draw a human face before painting the black square.

Modern dance is by no means second class or some low-quality staff. It is just a more democratic direction.

A dancer can make five, ten, fifteen pirouettes. But this is just a trick. Spectators won’t be remembering tricks but the meaning of dance.

Alexey Miroshnichenko is an artistic director of the Perm Ballet and one of the leading choreographers working in the neoclassical style. He was born in Donetsk in 1974. After the graduation from the Vaganova Ballet Academy he started dancing with the Mariinsky Theatre.

Miroshnichenko debuted as a choreographer in 1997 with The Wedding by Stravinsky on the stage of the Mariinsky Theatre. His first choreographic works were considered brave and stylish. In 2002 he majored in Choreography from the Vaganova Academy and went on to teach there for several years.

Miroshnichenko is in constant search for the new music for his performances. In 2007 he staged two ballets with the music of contemporary artists — Ring with to the music of Russian hip-hop band 2Н Company and As an Old Grinder… to the music of Leonid Desyatnikov. And in 2015 he overworked the forgotten suite of Shostakovich Conditionally Killed while reminding us that the author of some of the most gloomy and serious music of the 20th century in fact admired jazz music.

In 2009 during the cultural surge in the city of Perm, he was invited to become the artistic director of the Perm Ballet. With this ballet company Miroshnichenko has accomplished several outstanding ballets with Swan Lake, Jester, Petrushka, Fountain of Bakhchisaray, Romeo and Juliet amongst them. Miroshnichenko plunges into work: "I am not managing the company from the office. As everybody, I come in the morning, get changed in a cubbyhole, climb the staircase and I have the same sweat, running nose and sore fingers". It goes without saying that under Mirishnochenko’s leadership the Perm Ballet has not only polished its mastery but also won global recognition. Today it is the brand and one of the leading ballet companies of Russia.

Amongst the numerous awards of Miroshnichenko there are two Golden Masks for Searches in Modern Choreography (2012) and for Restoration of Dyaghilev Repertoire (2013).