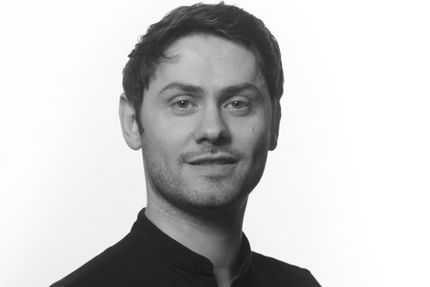 The work of the Italian choreographer Mauro de Candia is characterized by a special musicality. His choreographies often contain energetic group parts, but these are almost always alternated with silent and poetic fragments. Music and dance are an indissoluble duo for de Candia.

Sometimes his music choices are surprisingly surprising, for example as in Purple Fools — premiere in 2012 with the Milwaukee Ballet — where he combines effortlessly a Mozart aria, a well-known tango and a languid pop song. But de Candia can afford it: thanks to his great musicality, even the most wonderful music collages in his work sound perfectly logical.

De Candia started dancing at a young age. At the age of 10 he was discovered during a ballet competition in Verona by Marika Besobrasova, founder and director of the famous Académie de Danse Classique Princesse Grace in Monaco. She offered him a scholarship and from that moment de Candia attended summer classes in Monte Carlo every summer. After short periods at the school of the ballet company of La Scala in Milan and the Rudra-school of Maurice Béjart in Lausanne, de Candia completed his dance education in 1998 at the Académie in Monaco, supported by the John Gilpin Scholarship awarded by the Monegasque Princess Antoinette (the sister of Prince Rainier). In 2001 de Candia joined the Ballett der Staatsoper Hannover, where artistic director Stephan Thoss appointed him as a soloist after only four months.

Already during his engagement in Hannover (until 2006), then as a guest dancer and finally as a freelance choreographer (since 2008), Mauro de Candia pursued his choreographic projects.

Since 2012 de Candia is artistic director of the Dance Company Theater Osnabrueck in Germany.

Meanwhile he has choreographed for the leading ballet companies all over the world.

But even though he is staying abroad, de Candia still feels very connected to his homeland. In 1997 he founded the non-profit organization Arte&BallettO in his hometown Barletta. This association is dedicated to dance education and to the support of young dance students in Italy. De Candia received various prizes for his services, including the Premio Positano per la Danza, the Premio Giuliana Penzi per la Danza and, in 2009, a silver medal from the Italian government, presented by President Giorgio Napolitano.