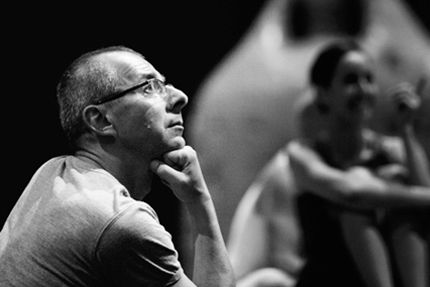 Born in Petit-Quevilly (Seine-Maritime) he made his studies with Monique le Díly, René Bon, Daniel Franck, Gilbert Mayer and Raymond Franchetti. He had a career as a dancer at the Paris national Opera, the Ballet of the Rhine and the French Ballet Theatre in Nancy. Ended his career as a dancer to found the company “Temps Présent” which was in Élancourt (Yvelines). Went to La Maison de la Culture in Saint-Étienne as an “Associated company”. Was appointed by the Minister of Culture to head the Centre Chorégraphique National in Biarritz. In 2006 не has recived his second nomination for the prize at the Benois de la danse with L’envol d’Icare created for the Ballet of the Paris National Opera. Thierry Malandain’s approach is underpinned by deep human values.

His search for meaning and aesthetics guides a timeless style both powerful and sober. It can be serious, as well as impertinent; and it draws its wealth from the roots of his art in a dynamic vision of his discipline. So, his troupe consists of performers versed in classical ballet technique,but the expression, through Thierry Malandain’s choreography, is contemporary. Through his creations, therefore, Thierry Malandain tries to develop his language to be in harmony with modern and classical movements, with history and today’s world. He alternates, in fact, between new, personal, powerful visions of works from the Repertoire, such as Romeo and Juliet, suites by Tchaikovsky with Magifique, Orpheus and Eurydice, The Afternoon of a Faun, The Nutcracker, The Bolero or Pulcinella, and pure creations such as Lucifer (2011), with a new score by the composer Guillaume Connesson, or A Last Song (2012) with ballads and musical laments of the France of yesteryear. Thierry Malandain is also an artist open to his ontemporaries as evidenced by the many choreographers with various aesthetics whom he welcomes in the Centre Chorégraphique National de Biarritz, or during the festival “Le Temps d’Aimer”, whose artistic direction is his responsibility.